$24,200,000. That’s last year’s budget for the Chabad on Campus network, which is spread over 142 campuses around the world. Another small number reveals that throughout the year, 6900 students regularly attend Shabbat dinners at a campus chabad house.

These figures, and many others which are no less impressive, were presented to participants in the annual Kinus Hashluchim for Chabad on Campus which took place over four days last week in New York. Over 250 shluchim, shluchos and 300 of their children enjoyed four days of lectures, classes, symposiums, farbrengens and more.

“Such a gathering is vital for all shluchim who work in this field throughout the world,” says Rabbi Yossy Gordon, Executive Vice President of Chabad on Campus international Foundation. “Events like these provide the shluchim with the ongoing support and professional training they need to continue their work.”

Anti-Semitism, missionaries, fundraising, communication, shalom bayis, halachic issues and over 80 subjects relevant to doing shlichus on campus were addressed during the days of the convention by a wide range of rabbonim, shluchim, mashpiim and lecturers who shared practical tips and solutions.

Along with the separate programs for Shluchim and Shluchos, there was an exciting camp for the shluchim’s children who live in isolated outposts the rest of the year.

“In the coming year we will be opening 10 new branches,” announced the organization’s chairman Rabbi Moshe Kotlarsky at an address during the conference. “The revolution brought about by chabad on campus in recent years shows its importance and necessity for Jewish students. But we can rest. Our job is to get as many students to participate in Shabbos meals, Torah classes and holiday events.”

Mr. George Rohr, who is considered the main supporter of the organization, did not hide his excitement about the figures that were presented at the convention. “I came here to tell you how proud I am of every one of you, and how proud I am of all you have done so far. There’s still much to do, and we’ll make sure that you will be able to do it both in quantity, and especially in quality.”

The successful event was arranged under the direction of Rabbi Moshe Chaim Dubrowski and his wife Nechoma Dina, with the help of the staff at Chabad on Campus and more than 80 volunteers who ran the kinus and the children’s camp. The shluchim and shluchus program were ably chaured by rabbi Yossi & Manya Lazaroff (Texas A&M) and rabbi Dovid & Goldie Tiechtel (University of Illinois).

Post Tagged: Chabad On Campus
Next Post: Foundation Announces Groundbreaking Partnership with JLI, Providing Grants to 13 Communities
Previous Post: After reaching 780 cities JNet takes on social media
Tweet Like Pin It Share
Related Posts
“IsraeLinks”: Learning at Mayanot, Volunteering at Kolel Chabad
The beginning of this month marked the close of 18…
Chabad on Campus Third Annual Texas Shabbaton
Did you hear about them bunch o’ Jews in Aggieland?… 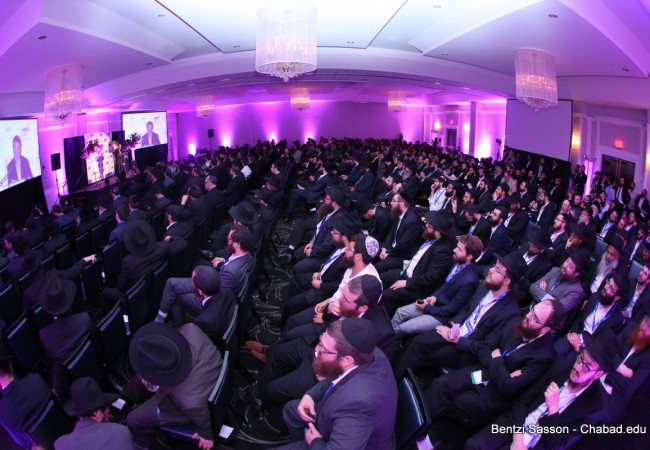