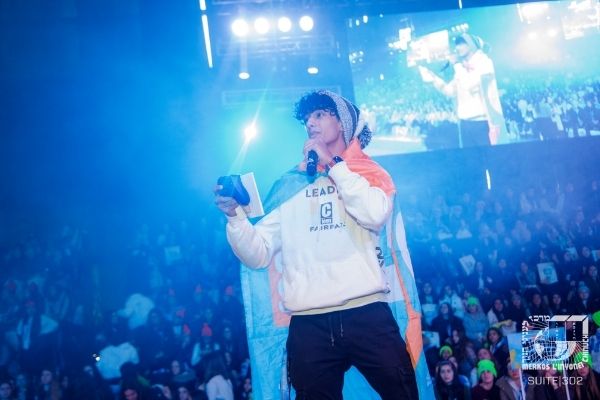 When Alfie Joseph’s bus pulled up to the CTeen closing ceremony, the massive scale of the event dawned on him. “The buses were lined up for three blocks outside the venue,” Alfie says, “I could feel the energy as thousands of teens came together to close the Shabbaton.”

When Alfie and his friends from CTeen Manchester entered the converted Agger Fish Warehouse in the Brooklyn Naval Yard, thousands of teens were already inside. Boys and girls from around the world stood or sat on bleachers overlooking a central runway, eagerly waiting for the program to begin.

The seating areas were designed as six sets that each depicted a different place in the life of a teen. Those seated in the “School” zone wore school sweatshirts and uniforms, and those sitting in the “CTeen lounge” section came dressed from head to toe in CTeen merch.

Hosted by Rabbi Adi Goodman of Chabad at Monterra, Florida, the two-hour program combined a concert with game show-like elements and highlighted the stories of several teens who found inspiring ways to bring Judaism into their lives.

First up, Hannah Butcher, a CTeen graduate from Fort Worth, Florida, shared her rollercoaster ride from being baptized to seminary in Israel, keeping Shabbat, and eating kosher. Later in the afternoon, Simona Itkin of San Diego, California, described the lessons she has learned while advocating for Judaism on social media, and Lior Ben David of Ashkelon, Israel, told the miraculous story of how fixing a mezuzah saved the life of her mother, and twin brothers.

Mikael Segal of Bucks County, Pennsylvania, was heartbroken when he had to turn down an offer to play soccer at a high level because the league only played on Shabbat. But one week later, his coach called back and said he’d gotten permission for Mikael to approach each team in the division and ask for the games to be moved to Sunday. “One by one,” Mikeal said, “they all said yes, just so one Jewish boy could play soccer with his team.”

Stories like these helped demonstrate how “there’s no perfect time to be Jewish” and show how relevant Judaism can be “Wherever, Whenever.” The program was produced by CTeen Dix Hills, NY Shliach Rabbi Dovid Weinbaum, and revolved around the teens by giving them a time to shine.

Several teens played a live game of “name that Jewish celebrity.” They saw videos of Jewish figures like Elon Gold and Paula Abdul describing how much they treasure their Jewish identity and doing Mitzvos such as putting on Tefillin daily and lighting Shabbos candles.

Rabbi Moshe Kotlarsky, Vice-Chairman of Merkos L’Inyonei Chinuch, spoke from the runway and urged the crowd to give the Rebbe a birthday gift of 120 Million Mitzvahs. “You have the power to change the world,” he said, “not because you are the future leaders of the Jewish people — but because you are today’s leaders.” Rabbi Mendy Kotlarsky followed up on a commitment made at this year’s Kinus and announced another winner of a CTeen lounge, this time it’s for the chapter in Denver, Colorado.

For Yair Shpiler, the emotional highlight of the entire Shabbaton came later in the program, when Beri Weber led the crowd in singing “Ani Maamin,” and “Tzoma Lecho Nafshi.” “After meeting hundreds of people in a short time, I hadn’t had a chance to take everything in and just feel the emotions of it,” he says. As he watched thousands of teens put their arms on their friend’s shoulders and join together in song, Yair closed his eyes and took a deep breath. “This was that perfect moment I was looking for,” he says. “Watching everyone sing from their souls, I felt whole, and a real pride in being Jewish.”

Watch the replay of the inspiring event here chabad.org/5406120 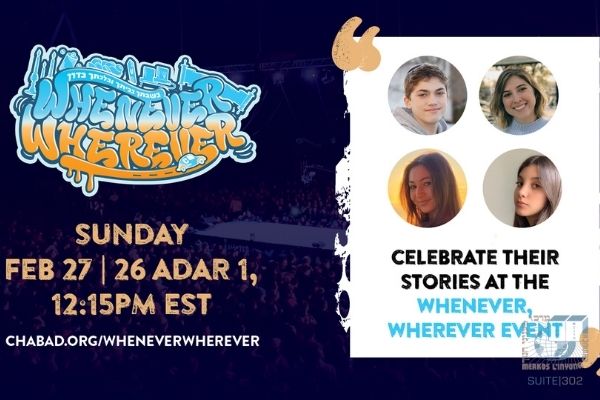 14th Annual CTeen Shabbaton’s “Whenever Wherever” Grand Finale Event
The annual culmination of the action-packed CTeen International Shabbaton, the… 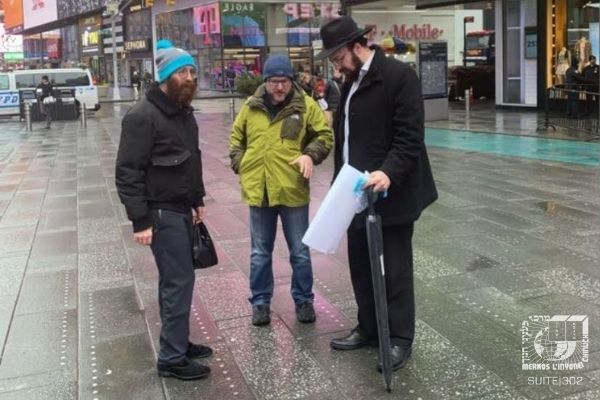 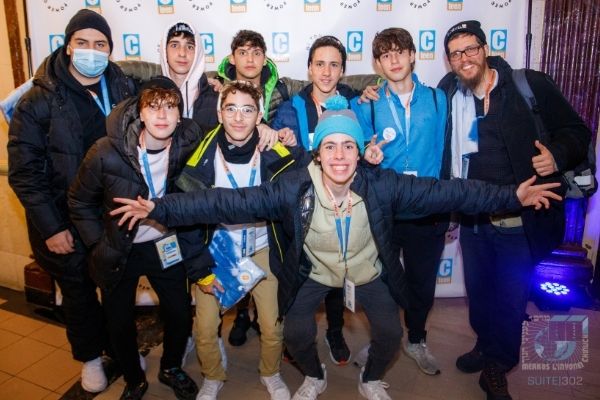