Hanna Briskin, 17, is counting the days until New York City. The high school senior from Gaithersburg, Md., is revving up for the annual CTeen International Shabbaton this weekend, from Feb. 26-28. There, she will join nearly 2,000 participants and chaperones from 23 different countries for three days of learning, touring, socializing and soaking in the atmosphere of all that the Chabad-affiliated organization has to offer.

In conjunction with this Hakhel year of Jewish gatherings, large and small, a focus will be on Torah, learning and mitzvot. And in the wake of recent terrorism, particularly in Israel and France, the theme of the Shabbaton is “unite with light”—transforming darkness into opportunities of light and goodness.

The program includes Shabbat meals and services in the Crown Heights neighborhood of Brooklyn, N.Y., along with a chance to visit Lubavitch World Headquarters at 770 Eastern Parkway, as well as the Ohel, the resting place of the Lubavitcher Rebbe—Rabbi Menachem M. Schneerson, of righteous memory—in Queens, N.Y.

Also on tap: a double-decker bus tour of Manhattan; a traditional Shabbat experience, with meals, prayer, and educational and entertaining aspects to the day; and a Havdalah ceremony and post-Shabbat Jewish celebration in Times Square, complete with musical performances. The weekend concludes with a banquet at a larger venue this year—the Brooklyn Expo Center—to accommodate the size of the group.

This is Briskin’s fourth time attending the Shabbaton. She’s especially looking forward to a leadership breakfast in which she is participating and a learning track at New York University: “It’s going to be a really amazing experience—not just to visit the city as a tourist, but actually to visit the school as a Jewish girl.”

As for first-timers, she assures that there’s no reason for last-minute jitters. “They don’t understand how amazing it is,” she says, but they will. She wants to help those who attend “by instilling a love for CTeen.”

Making friends is easy, she says, explaining that she’s met people on Facebook through CTeen and looks forward to interacting with them offline. “I’m in a thousand group chats that are always active, and plenty of us Skype.”

She wants to come away with “more friends, hopefully some incredible memories, and definitely a better appreciation and awareness of the Jewish spark inside me.”

With college right around the corner, she says she also wouldn’t mind acquiring added tools for this next stage in her education. “I have no doubt that Chabad on Campus will be a huge part of my life,” she says. “I can’t imagine going to a school without a Chabad.”

The CTeen Network is inspired by the Lubavitcher Rebbe, whose belief in the power of youth transformed the teen years into a time of purpose and self-discovery. As such, a global organization was created to reach teens in public schools, from unaffiliated backgrounds and in places where few other Jewish families reside to empower them as Jewish individuals and leaders.

“Our mission is to provide a nurturing environment where teens can learn about themselves through giving to others, identify with individuals who share the same faith, and be part of a group that focuses on building core values and stresses positive character development,” explains Rabbi Mendy Kotlarsky, executive director of Merkos Suite 302. “CTeen helps produce a transformation from the reflection of ‘Who am I?’ into a solid character built on values, virtue and character.”

Through their participation in their home communities and at the annual Shabbaton, these young men and women begin to see the world around them through the Torah’s perspective, learning Jewish values in intuitive and creative ways.

“This solid Jewish foundation outfits teenagers with the capacity to make better choices as they grows to adulthood,” says Kotlarsky, “especially as they transition from high school to college, where they can be active with Chabad on Campus, and continue to build on their Jewish knowledge, involvement and practice.”

Rabbi Sholom Raichik, who directs Chabad of Upper Montgomery County in Gaithersburg, Md., with his wife, Chana, jokes that he’s “skewing the age of the entire process” by going to the event.

He’s bringing half-a-dozen teens this year. Chapters in the Washington, D.C., area fill an entire bus and together make the trek to New York City. “The bus trip is part of the excitement that the teens look forward to,” says Raichik.

They also give each attendee a personalized item—last year, it was tote bags; this year, scarves. The group will arrive on Thursday and depart back for home on Sunday afternoon. “The teens have a great time; they make friendships with others from around the world, friendships that stay with them throughout the year,” explains the rabbi. “They really bond together, and they become inspired; they lead the charge. After all, they’ve been anticipating this from the moment that registration opened.”

It’s powerful to watch teenagers get excited about Jewish things, he adds. “The energy that you see and the friendship—the life that is there—it’s inspirational.”

Beyond the Shabbaton, CTeen groups, which by chapter also have local and regional events, create a connection for teens that brings them back into the Chabad at other times, says Raichik. “It’s created this whole club of teenagers coming to the shul on a regular basis, who are there for different activities, who are involved. They’re involved year-round with what’s happening in Chabad, and it’s truly a blessing.”

Talia Lewis is coming in with members of the CTeen chapter of Chabad of the Conejo in Southern California. The high school junior will arrive on Friday for her first-ever New York City Shabbaton as part of her first year in CTeen, and also her chapter’s first year. “I’m so glad I have this amazing opportunity to go,” she says. “I am most excited about being with the thousands of other Jewish teens in the middle of Times Square.”

Having been to a CTeen leadership retreat in Pennsylvania, she says she knows other students who are going, along with the teens from her chapter—a group of 15. “I hope to come back having met more Jewish teens from around the world, as well as with a stronger sense of who I am as a Jewish woman,” she says.

Edan Zabihi, 16, is participating for the third time. The high school junior will be traveling to the Shabbaton with Chabad Lubavitch of Northern Virginia. He’s expecting friends from Manchester, England, and from Israel, as well as from around the country. “During the year, we video chat once a week or text on WhatsApp. I’m always in contact with them, but it’s different actually being together,” he says.

Though he gets to New York frequently for family events, this trip is unique. “There’s practically no sleep; you go from one thing to the next. It’s a good time; it’s well-planned and well-organized,” he notes. “I think it’s great, so many Jewish people together. Where I come from, I maybe know 20 Jewish kids in my area at most, and that’s a stretch. So to see so many when you’re not in Israel, it’s a cool thing.”

For Maddie Met, this year’s event is a bit bittersweet. It will be her fourth and final CTeen Shabbaton before she heads to seminary next year. The 17-year-old high school senior from Mequon, Wis., who has been very active with CTeen at the Peltz Center for Jewish Life there, is attending with a group of 20 students.

“I love to see and experience the immense sense of spirit that fills the streets of New York as these proud teens gather together for this amazing weekend,” she says. “It is so special to watch the achdus [‘unity’] of all the different groups, especially in this year of Hakhel.” 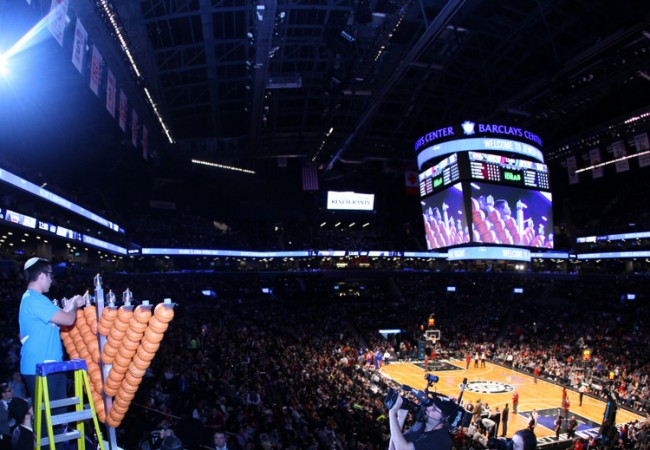 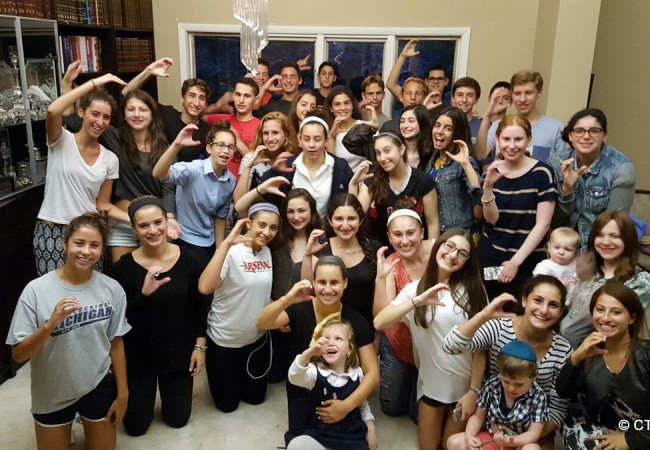