The Tut Altz team at the Moshiach Office is proud to announce the winners of the Tut Altz Kids Contest 5781!

Kids from around the world were called upon to prepare presentations about Moshiach in a first-ever competition and they heeded that call in great numbers.

As the adults were busy learning their Tut Altz curriculum track, young boys and girls were engrossed in the amazing lessons on Hilchos Moshiach of the Rambam, using the childrens’ track specially designed to engage young kids. The knowledge turned into action, as hundreds of kids participated in the competition of creating a project from the material they were learning.

“It wasn’t just the number of kids that got involved,” Rabbi Shloimie Naparstek, director of the Moshiach Office at Merkos 302, pointed out, “It was the quality of the projects that continued to pour in. The attention to detail and creativity of the children served as testament to the new understanding and grasp they all had on these vital topics.”

Entrees were judged for creativity and content. After much deliberation, the finalists were chosen and judged. The results are a winner in each grade level and an overall international grand winner.

Dovid Weinfeld of Cheder Chabad Toronto, was the winner of the first and second-grade contestants, receiving a mega Lego set. In a clever and entertaining way, he depicted what a Tzivos Hashem rally would look and sound like during the days of Moshiach.

In the 3rd grade, Yitzchak Rosenblum of United Lubavitcher Yeshiva, Crown street, came out on top. Using the knowledge he gained from the final chapters of Rambam he displayed the Arei Miklat including the three additional ones that will be added with Moshiach’s arrival. His work earned him an awesome RipStik.

A state-of-the-art Drone went to Rivka Spritzer of Beis Chaya Mushka, LA, as the 4th-grade winner. In her video, she depicts scenes from Yemos Hamoshiach as she learned them in the curriculum.

One of the themes that came up over and over in the many presentations as a novel idea to many children, was the concept of there being two eras in Yemos Hamoshiach. Shaina Glassner of Cheder Sydney, Australia, really drove this message home with her beautiful clay modeling, making her the winner of the 5th graders. Her prize? An electric scooter!

The Grand Winner was Dina Rubin of Maimonides Hebrew Day school, Albany, NY. Her work presented a skillful mix of creativity, clarity, and artistic flair. The topic she chose was how the world will be when Moshiach comes, as well as what we must do to effectuate that!

In addition, we are proud to showcase the other finalists who did a superb job in their very creative entrees!

Yakov Yehuda Wilansky a first grader from Cheider Menachem Moscow. His project presented a contrast of his previous understanding of Yemos HaMoshiach being about candies growing on trees and his new understanding that it will usher in a Shleimus in Torah.

Nechemale Wilansky, Grade 4, Bnos Menachem Moscow. Her work depicted the timeline of how Techiyas Hamesim will take place in the second tekufah (era) of Yemos HaMoshiach.

Riva Minkowitz and Chana Wenger, Fourth Graders from Beis Rivkah Montreal. Together they wrote up a beautiful poem about the times of Moshiach.

Mushka & Shaina Shuchat, Grade 6 and Grade 3 of Cheder Chabad Sydney. They put on a play explaining the two tekufos (eras) of Yemos HaMoshiach. 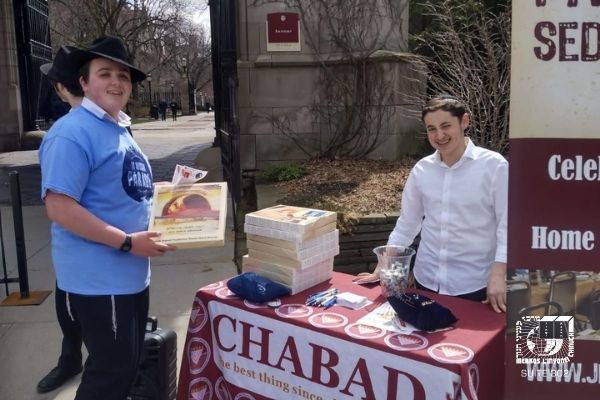 Mitzvah Tank Parade Gets Competitive
Thanks to the innovative new OneMitzvah platform, this year’s Yud… CTeen Summer, Chabad on Campus Welcome Teens to College
Over the years, hundreds of teenagers have come back from…