“A new and better you” “the baby blues” “the better half”, these where just some of the workshops that was filled to capacity today as the 22nd International Conference of Chabad-Lubavitch shluchos got underway.

Thousands of women from across the globe have convened in Crown Heights, Brooklyn, for the weekend conference which is held annually in memory of Rebbetzin Chaya Mushka Schneerson.

As registration opened at 9am in the Jewish Children’s Museum with Rabbi Mendel Kotlarsky and Rabbi Shnuer Nejar overseeing the process, many women took the early opportunity to pick up their photo identification badge, conference schedule and bag that was specially made for this conference.

This was followed by a lavish continental breakfast which was served in the main ballroom of “Oholei Torah”, where the shluchos heard greetings from Mrs Shterna Lewis and Mrs Sarah Lowenthal, both from England, while tehillim was recited by Mrs Mushie Litzman from Seoul, South Korea.

The main attraction on the opening day of the Kinus was the over 30 different workshops, classes and symposiums that focused on subjects from gourmet Shabbos cooking on a budget with Chef Jack Silberstein, to everyday tips on how to keep the warmth and enthusiasm of Chassidiskeit vibrant in our families. With most workshops being held simultaneously throughout the day many shluchos had to make the hard decision of which workshops to attend and those that they had leave out.

In addition to the conference for the shluchos, a simultaneously conference is being held for their guests. Today they heard from Rabbi Avraham Berkowitz who spoke on the topic of, “discovering the divine providence in our life” and Mrs Chani Rosenblum who brought with her greetings from Venezuela.

The conference is running for another 3 days, culminating in a grand banquet on Sunday night at the New York Hilton in Manhattan. 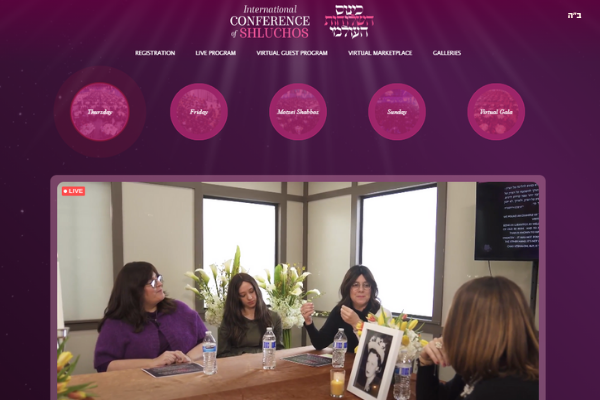