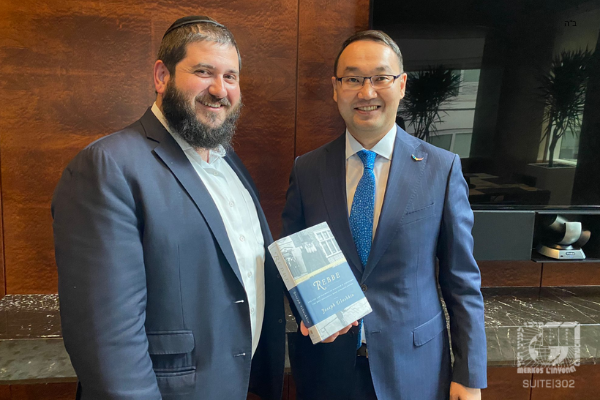 Yerzhan Ashikbayev has had a busy few months. Ever since being appointed as Kazakhstan’s ambassador to the United States in April, Mr. Ashikbayev has met with numerous diplomats and government officials for the sake of strengthening the ties between the Central Asian country and the U.S. As part of this task, the ambassador, together with Consul General Almat Aidabekov, scheduled a meeting with Chabad to discuss the state of Jewish life in Khazakstankhstan.

Invited to the meeting were Rabbis Mendy Kotlarsky and Shimon Rivkin of Merkos Suite 302 at Chabad Headquarters, and Mr. Emmanuil Grinshpun, who serves as vice-president of the Euro-Asian Jewish Congress and as an Honorary Consul of Kazakhstan. Together, they discussed the history of Jewish life in Kazakhstan and the present work that Chabad does around the country under the auspices of Rabbi Yeshaya Cohen, Kazakhstan’s head Shliach and Chief Rabbi.

“It was an extremely fruitful meeting.” Mr. Grinshpun later said. “We are truly blessed to have leaders such as the former president, Mr. Nazarbayev, and the current President, Mr. Tokayev, who have cultivated such warm religious tolerance in the country. We all feel that the government is a true friend to the Jewish people.” The Ambassador and Consul General reiterated the government’s support for the Jewish community and all religious minorities. They also expressed interest in cooperating with Chabad to continue to build Jewish life in the Republic.

The government of the mainly Muslim population is proud to be religiously tolerant and works closely with all types of religious leaders to promote wellbeing in the country. In fact, Ambassador Ashikbayev has already worked together with Chabad Shluchim and philanthropist Mr. Abraham Shaulson while serving as Deputy Minister of Foreign Affairs back in Kazakhstan. With all flights grounded last year due to COVID-19, he was instrumental in arranging special permission for a small delegation from America to fly to the country to make a pilgrimage to the gravesite of Reb Levi Yitzchak Schneerson on the 20th of Av – the anniversary of his passing. The delegation also used the opportunity to sponsor and transport much-needed PPE and medical equipment to the country. During the pilgrimage, the Kazak government held a ceremony to declare Reb Levi Yitzchak’s Kever a Kazakh National Heritage Site.

With the 20th of Av just two months away, the meeting also discussed the plans for the upcoming pilgrimage. This year, the organizers are expecting a crowd of over 600 guests from around the world. Additionally, there are plans to hold a conference of Chabad Shluchim from surrounding countries, led by Rabbi Moshe Kotlarsky and Rabbi Berel Lazar. With such large projects underway, the meeting focused on ways the government can support and secure the event. Mr. Ashikbayev confirmed Kazakhstan’s “…commitment to provide every assistance in arranging visits for prayer and study at the resting place of the great Rabbi Levi Yitzchak Schneerson.”

“We are really appreciative of the tremendous open support that the Kazak government is giving us,” said Rabbi Kotlarsky. “It is a true blessing to be working with people such as the Ambassador and the Consul General. Our mission is to care for the spiritual and physical needs of every single Jew, and the government of Kazakhstan has been a great partner in furthering this mission.” 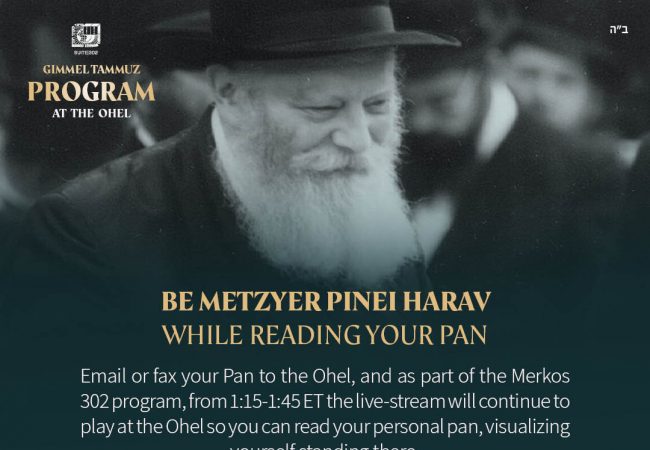 MIDWESTERN SHLUCHIM GATHER FOR REGIONAL KINUS
Last week, 40 Shluchim gathered in Milwaukee, Wisconsin for 2 days…
Chabad of the Maritimes Brings Hands on Menorah Building Workshop to the Home Depot
Many branches of the Home Depot conduct workshops once every…