The National Jewish Retreat held this past week in Weston, Florida, was a sold-out phenomenon that drew on an international roster of speakers, teachers and outstanding personalities from the business and academic worlds.

Some 800 Jews from all over the world gathered for five days of inspiration and learning sponsored by the Rohr Jewish Learning Institute (JLI). Now in its seventh year, the Retreat was many months in preparation to ensure the professionalism that showed in every aspect of the Retreat, from the speakers and entertainment to the videos, multimedia, gourmet meals, and complex scheduling for more than 50 presenters.

Commenting on the spirit of unity based on Torah learning that pervaded the Retreat, JLI chairman Rabbi Moshe Kotlarsky said, “It was remarkable to witness firsthand the unprecedented array of fellow Jews from all walks of life immersed in the study of Torah and Chasidus for five consecutive days.”

A smorgasbord of lectures and workshops featured scholars, lecturers, rabbis and rebbetzins teaching a wide variety of Jewish themes and confronting the boundaries of contemporary thought on a variety of issues, from ethics to relationships to scientific discoveries. A concert by Eighth Day rocked Hyatt Bonaventure grand ballroom Thursday night, culminating in their worldwide hit, Ya’alili.

Chief Rabbi Yisrael Meir Lau, Israel’s former Chief Ashkanazi Rabbi, delivered several moving talks relating his personal experiences as a Holocaust survivor and as a spokesman and advocate for the Jewish people in the world arena.

In recognition of her achievements in promoting Jewish reading and authorship worldwide, JLI presented Mrs. Carolyn Hessel, director of the Jewish Book Council, with a special award reflecting the shared interests of both organizations.

While the Retreat was about learning Torah, it was also about finding individual, personal meaning and purpose within the Torah’s wisdom. Among the man sessions addressing personal themes were Rabbi Yitzchok Schochet’s discussion of how to understand the presence of suffering in the world and Rabbi Sholom Lipskar’s explanation of the phrase “a light unto the nations,” clarifying our relationship with non-Jews. Mrs. Chana Lipskar, with the prophetess Devorah as example, spoke about how women can tap into their hidden power and potential.

Rabbi Moshe Bryski challenged participants to live the life they were meant to live, leading one participant to comment, “He made me laugh! He made me cry! He inspired me!”

Tying the Retreat experience together in a final keynote address, Rabbi Lau shared his erudition and depth of feeling for the Jewish people, explaining that each Jew becomes part of the unbroken chain of Torah study by taking their experience of the Retreat home and continuing to learn Torah.

Next Post: Bringing New Light to an Old Mivtza
Previous Post: Mitzvos @ Jewish Teen Olympics
Tweet Like Pin It Share
Related Posts
JLI Hosts 7 Mega Events across Israel
One of the largest groups to ever visit Israel, the…
RCS Pioneers Closed-Captioned Media for Hearing-Impaired Students
“No Jewish woman will be left behind,” is the… 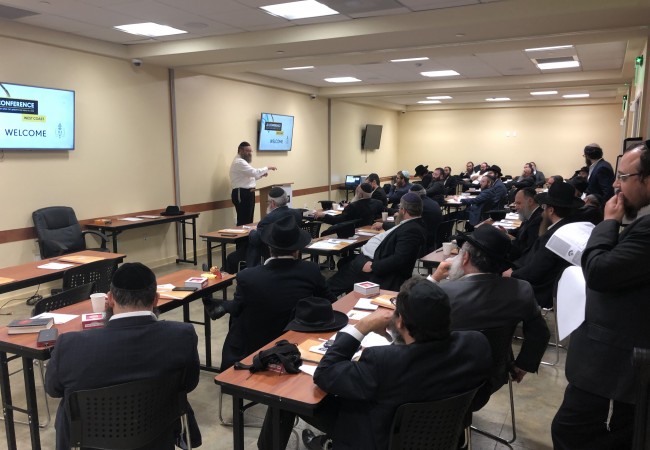