Uniting across languages and national borders, Jewish leaders throughout the world paid tribute to the life of visionary businessman and philanthropist Sami Rohr through the collective study of the entire Talmud. As representatives of their respective communities, Chabad-Lubavitch emissaries on six continents, who began their study just after Rohr’s passing, concluded their examination of Judaism’s central rabbinic text at special ceremonies coinciding with the completion of the 30-day public mourning period known as shloshim.

(The Talmud, which comprises 2,711 double-sided pages of text when accompanied by its standard commentaries, takes more than seven years to complete by an individual learning one page a day.)

In an emotional address at the central ceremony last week at The Shul of Bal Harbour – the Surfside, Fla., synagogue that Rohr helped build and held close to his heart – Rabbi Moshe Kotlarsky, vice chairman of Merkos L’Inyonei Chinuch, the educational arm of Chabad-Lubavitch, referred to the man responsible for underwriting much of a resurgence in Jewish life in communities worldwide, as at times like a father. He was a living example, he added, of what it means to infuse all of one’s dealings with truth.

In its concluding verses, the Talmud, said Kotlarsky, credits one who studies Jewish law as inheriting the World to Come, basing itself on a variant reading from the prophecy of Habakkuk. Where the biblical verse uses the word halichot to indicate that the “ways of the world” are G‑d’s, says the Talmud, it should be read as halachot, or laws.

“There are two aspects to a person’s life,” explained Kotlarsky. “Halichot means going, moving, going forward. Halachot means a way of life conducted according to the Code of Jewish Law.

“We tend to take a person’s life and encapsulate it in three sentences,” he continued, addressing himself to Rohr’s grandchildren. “Fine man, generous man, devoted husband, honest businessman. But each day is a journey. Each day has so much meaning. And your grandfather’s life had that meaning to it. Each moment was counted.”

The Sept. 4 ceremony in Florida drew on the in-person participation of family members, hundreds of local community members and emissaries that had flown in for the occasion, and Jewish leaders from key cities that marked the arc of Rohr’s life also took part by live hookup. Grandchildren Alex Rohr, Michael Tabacinic, J.J. Katz, and Eli Tabacinic presided over the evening, while Debby Tabacinic narrated with her cousin Alex a moving tribute video that traced the major milestones in their grandfather’s life.

After George Rohr concluded the local study of the Mishnah in the merit of the ascendance of his father’s departed soul, rabbis from Berlin, where Sami Rohr was raised, to Bogota, where he led the development of the Colombian city’s west side and transformed its Jewish community, delivered scholarly addresses on each of the Talmud’s six massive sections.

Speaking in their native tongues and addressing audiences ranging from schoolchildren to senior citizens, the rabbis – Community Rabbi of Berlin Yehuda Tiechtel, Chabad House of Antwerp director Rabbi Shabtai Slavaticki, Chabad-Lubavitch of Lyon director Rabbi Shmuel Gurewitz, Chabad of Basel director Rabbi Zalman Wishedski, Rabbi Mendel Azimov of Paris’ 16th district, and Chabad of Colombia director Rabbi Yehoshua Rosenfeld – lauded Rohr for changing the lives of hundreds of thousands of Jewish men, women and children from one end of the earth to the other.

“I could summarize my thoughts about our friend very briefly and already finish after a few words,” began Gabriel Feldinger, whose parents opened their Basel home to a young Sami Rohr fleeing the Nazis with his own parents. “He was a mentsch in every respect. The task that all of us have, to be a mentsch, is not easy to accomplish, but our dear Sami exemplified it with his characteristic humility. If someone needed help, Sami was the right address, and it is indescribable how much pleasure it gave him to do others a favor.

“He did not expect thanks,” continued Feldinger. “He acted according to his own conscience, and knew that all good deeds are recorded for the World to Come.”

Colombian Chief Rabbi Alfredo Goldschmidt, who worked closely with Rohr in developing the community in Bogota and in bringing Rosenfeld to the city, agreed.

“For me Sami was a teacher,” he said. “I will never forget the hours we spent together, in the first part [as study partners] and then whenever I had an occasion to jump over to Miami. I thank the [Master of the Universe] for being close to hear and be heard by Sami Rohr.”

Throughout the evening, speeches kept returning to a central point: That deeds matter more than intent, but when the intent itself is also pure, a person can seamlessly bridge the physical and spiritual worlds. Such was Rohr’s life, asserted The Shul’s spiritual leader Rabbi Sholom Lipskar, as he challenged listeners to emulate his example.

“We had such a millennial giant, such a person of historical perspective living in our community and molding our community in a personal way,” stated Lipskar. “That is a merit that we will always be thankful to Almighty G‑d and to the Rebbefor sending me here.”

But in keeping with its theme of action, the ceremony dwelled not on the past. Instead, Lipskar pointed to two initiatives his community would undertake in Rohr’s memory – to enliven its kollel, or yeshiva for adults and to encourage young post-Bar Mitzvah men to lead public prayer services on at least a monthly basis.

Addressing those initiatives undertaken elsewhere around the world, Kotlarsky mentioned a long list of programs, from strengthening college students’ study of Jewish texts to teenagers studying sections of the Mishnah to the creation of a research institute under the aegis of the Rohr Jewish Learning Institute for the benefit of teachers developing advanced classes.

Kotlarsky also announced two major undertakings. First, he said, the Rohr family would dedicate a groundbreaking edition of the Tanya, the foundational 18th century text penned by the founder of Chabad Chasidic thought, the Alter Rebbe, Rabbi Schneur Zalman of Liadi. Containing an exhaustive commentary culled from the successive writings of the Lubavitcher Rebbes, this was a project the Rebbe, Rabbi Menachem M. Schneerson, of righteous memory, himself identified as a “monumental task” and one that bore special connection to Rohr, who was attracted to Chabad philosophy after reading a letter penned by the Alter Rebbe.

In addition, said Kotlarsky, the dedication of the brand new Jewish center and synagogue at the Alter Rebbe’s resting place in Haditch, Ukraine, would take place later this fall in time for the 19th day of the Hebrew month of Kislev, the anniversary of his release from prison and a day celebrated by Jewish communities around the world as heralding the public dissemination of Chasidic teachings.

“He had this insatiable desire to be able to accomplish more and more,” noted Kotlarsky. “Whatever we did wasn’t enough.”

Along the same lines, George Rohr looked at the concluding lines of the Mishnah as offering a lesson in how his father conducted his life and presented a template for others. There, Rohr pointed out, the 2nd century text penned by Rabbi Yehuda Hanasi ascribes 310 spiritual worlds as the inheritance of the righteous, basing itself on a verse from the Book of Proverbs. The Torah itself declares that it has “substance to bequeath to those who love Me,” using a Hebrew word for “substance,” yesh, that also has the numerical equivalent of 310.

The specific use of the word yesh, posited Rohr, could be implying that the reward of the righteous is intricately connected to the material work that takes place in this physical world.

“As a family, from the ayin that is the vast, aching, unfathomable void, we must create yesh,” he continued. So too, whether in the realms of “education, spiritual growth or charity, every Jew has an obligation to create yesh and give it to others.” 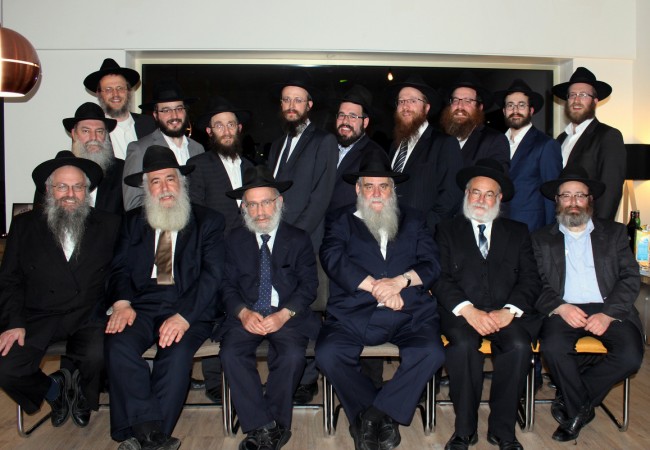 Photo of the Day ● Amsterdam
While traveling from the opening of the world fair which…
Tzfas Mayor visits Chabad HQ
The Mayor of Tzfas, Mr. Ilon Shochat, visited Crown… 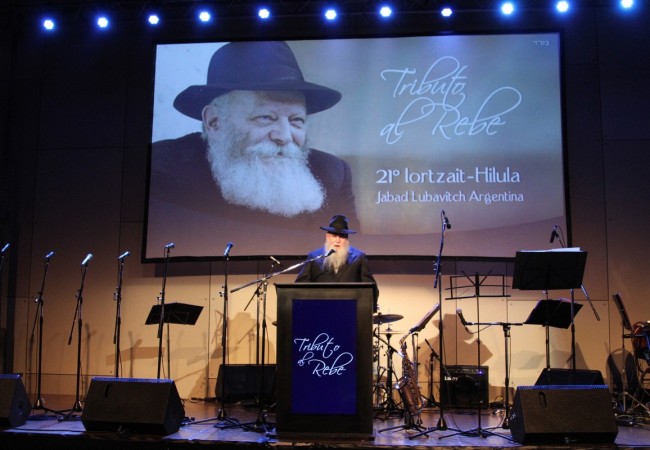 An Evening of Inspiration and Hiskashrus in Argentina
On Monday Chof Ches Sivan, June 15, a crowd of two thousand people, members…