Every Chanukah, college students around the world can count on their campus Chabad House to electrify the holiday with menorah lighting ceremonies, parties and dreidel spinning contests, galore.

Now, for the second year in a row, the Chabad on Campus International Foundation is also bringing the eight-day Festival of Lights right to the doorstep of one of the country’s oldest traditionally Jewish fraternities, Alpha Epsilon Pi.

AEPi, a 97-year-old fraternity, officially teamed with Chabad on Campus to ensure that all 145 of its chapter houses in the United States and Canada received a menorah, a stash of candles, a dreidel and a holiday guide. AEPi provided the addresses and covered shipping costs, while Chabad created the kits and made sure every location received one on time for the holiday.

Addressed to each chapter’s president, the packages also encouraged fraternity brothers to host a Chanukah party using the provided materials.

Michael Zaslow, AEPi Chapter President at Northwestern University, hosted a party on the first night of Chanukah for around 15 brothers. They lit the menorah and ate donuts, a traditional fried holiday delight.

“We probably would have done something to celebrate Chanukah [anyway], but the kits made it a lot easier,” said the senior, whose party was attended by Rabbi Dov Hillel Klein, a Northwestern chaplain and director of its Tanenbaum Chabad House.

“This is an amazing program and opportunity to really encourage the celebration of Chanukah on campuses,” said Klein, who holds several positions within AEPi, including those of international rabbi, assistant regional governor, and faculty advisor for the Tau Delta chapter. “To get the brothers of the fraternity together to light a menorah collectivity is very special thing.

“AEPi and Chabad on Campus,” he added, “have a wonderful history of working together not only on the international level but on the local level, as well.”

Founded in 1913 at New York University as a response to anti-Semitic prejudice on American campuses, Alpha Epsilon Pi is one of the few fraternities that has maintained its commitment to Jewish identity and causes over the years. The fraternity is not specifically religious in nature, but rather social and cultural, boasting chapters in the U.S., Canada and Israel. Over 90,000 men have been a part of AEPi, which prides itself in cultivating character, responsibility and commitment to Jewish leadership in its brothers.

Its relationship with Chabad on Campus is broad and differs from campus to campus. The two often hold joint Passover Seders, Shabbat dinners, Purim parties and philanthropic events.

“On a number of campuses, Chabad has been incredibly instrumental in helping our chapters,” said Adam Teitelbaum, international director of Jewish programming at AEPi’s headquarters in Indianapolis, Ind. “When a chapter wants to do something Jewishly, Chabad on Campus is always there to help us do it. It’s one of those amazing partnerships.

“Say Chabad wants to have an event on campus,” he continued. “We have an organization full of Jewish men to send, so now they have attendees. The flip side is that if we want to have a Shabbat dinner, we can send them to Chabad. It’s a very symbiotic relationship.”

Teitelbaum cited this past Sukkot as an example. Chabad on Campus offered a grant of $250 to each new AEPi chapter that built a proper sukkah, money that went towards funding the structure. Sixteen chapters received the grant.

This year for Chanukah, Teitelbaum helped chapters arrange candle-lighting ceremonies and parties, many in conjunction with Chabad on Campus.

At the University of Maryland, Rabbi Eli Backman, director of the Bais Menachem Chabad Jewish Student Center, held a party on the first night of Chanukah at the Alpha Epsilon Phi sorority. AEPi brothers joined the celebration, driving attendance to nearly 70 people.

“Chabad came and brought latkes and donuts and other treats and stuff,” said AEPi chapter president Benjamin Rank. “We lit the menorah, and it was a great opportunity for us to bring in the holiday together. They have a great way of keeping us in line in our Judaism.”

Turning to the Chanukah kits, Rank said that he and his fellow brothers appreciated the care shown for his fraternity.

“We’re college students and we don’t necessarily think ahead like that,” he explained. “Chabad is always there to fill the need. We had their menorah and we said, it’s here, why not light it.”

Klein originally suggested reaching out to AEPi with versions of the same packages the Chabad on Campus International Foundation annually sent to campuses without a full-time Chabad House.

“AEPi was more than happy to be a partner with us,” related Klein.

The kits arrived at the frat houses the week of Thanksgiving.

“We sent them out a week before Chanukah, because we wanted them there on time,” detailed Rabbi Moshe Chaim Dubrowski, the international foundation’s director of operations. “This year, we had a bigger list and sent everything out earlier with accompanying information, ideas for parties and a suggestion to connect with the local rabbi.”

Since the start of Chanukah, both AEPi and Chabad on Campus have gotten positive feedback about the collaboration.

“The AEPi chapter at Virginia Tech teamed up with Hillel for a Chanukah party, and they used the menorah from Chabad on Campus. It was a cool event,” said Michael Waitz, the Howard Lorber Director of Jewish Programming and Philanthropy at AEPi, who spent the first night of the holiday at Virginia Tech.

The next night, Waitz celebrated at Virginia Commonwealth University, where AEPi brothers used the Chabad on Campus kit to kindle their flames. Waitz is currently on tour visiting AEPi chapters, something he does regularly as part of his position. 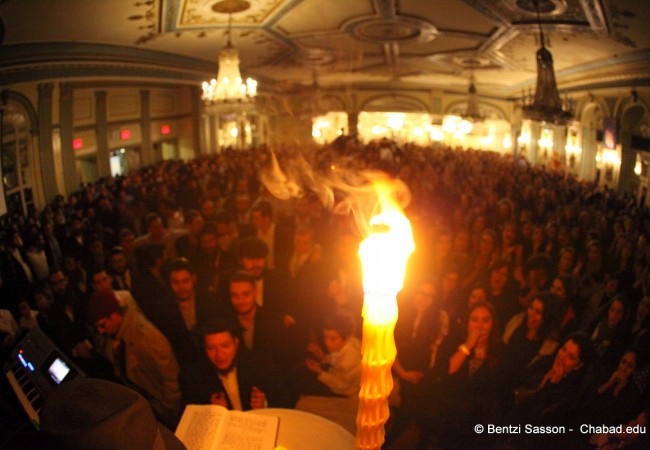 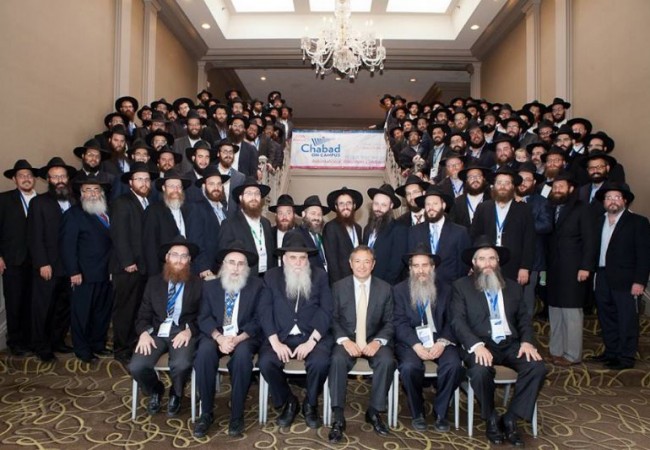